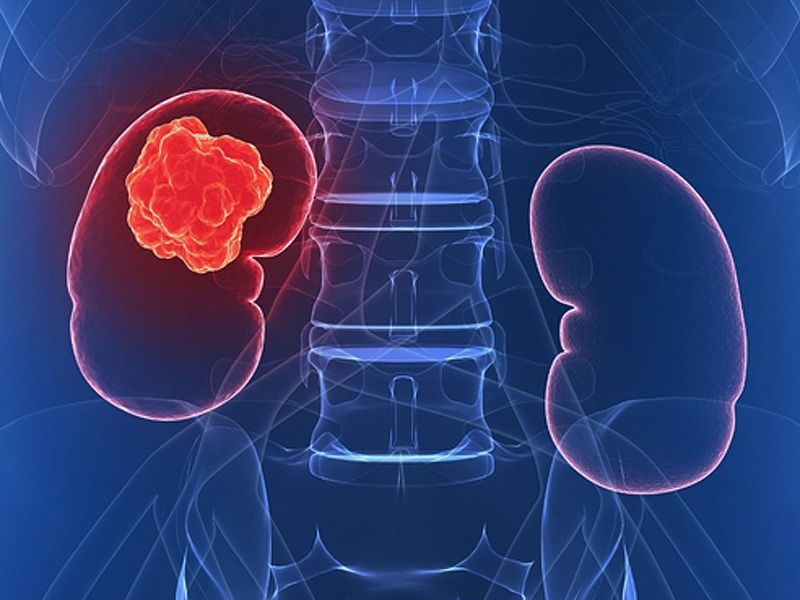 Kidney tumors may be malignant, benign or inflammatory in origin. This cancer affects 54,000 people annually in the United States of America, and 13,000 people die from it.

Incidence statistics: The incidence of kidney cancer is between 2-3% of the statistics of cancer cases in general in humans, but it is more dangerous to life compared to other urinary tract cancers.

Knowing that 30-40% of people with this cancer die as a result, compared to 20% of those with bladder or prostate cancer, and this cancer is a disease that affects people in advanced age between the ages of sixty and seventy years, but the overwhelming majority of kidney cancer It is spontaneous, but only 2-3% is caused by genetics.

Clinically and research-proven causes are:

As for the speculative reasons, they are as follows:

Exposure to lead, as well as exposure to chemicals such as hydrocarbons, metals, rubber, and dyes, as well as to asbestos and cadmium, and eating foods containing saturated fats.

3- The third stage: In this stage, the ureteric, ureteral and renal reflux is accompanied by mild or moderate ureteral dilatation, and there may be curvatures in the ureter, and at the same time there are medium-degree expansions in the combined renal system, but the renal vaults may be deformed as a result of this. Urinary reflux.

A- Primary and contingent realism:

4- Infection with malaise and apathy.

2- Varicose veins in the right testicle that are not retractable.

There are several methods for diagnosing kidney cancer and its stages and distinguishing it from benign or malignant tumors in the kidney, including:

3- Examination of the kidney by ultrasound and color (Color Doppler).

With the development of the above-mentioned diagnostic methods, it is now possible to diagnose these tumors early and treat them successfully with a rate of 98%. This treatment is done either by endoscopic ablation of the tumor only and without nephrectomy, where the size of this malignant tumor should not exceed 5 cm.

As for the laparoscopic radical removal of the affected kidney, it is performed only in case the size of the malignant tumor exceeds 5 cm.

One third of patients with kidney cancer are diagnosed with a cancerous spread in the body at the same time, knowing that if this tumor is not eradicated early, in this case, these patients must undergo non-surgical treatment (chemical and immunological), knowing that these drug treatments have clinically proven positive effect. by controlling proliferation and two-year survival,

As a precaution, we must advise every person addicted to smoking to dispense with that, as well as people who are obese to change their wrong lifestyle that leads to this obesity through a distinct diet that is low in fat and distinct in containing vegetables and fruits, and start exercising for 6-8 hours per week.

As for people who automatically discover the presence of blood in the urine with or without pain, these patients should consult a doctor who specializes in the treatment and surgery of urinary tract diseases in order to be diagnosed through distinguished clinical examinations for these dangerous symptoms. If a tumor is discovered and diagnosed in the kidney, the early radical or partial endoscopic excision of the tumor or the kidney It is the only way to survive and survive.