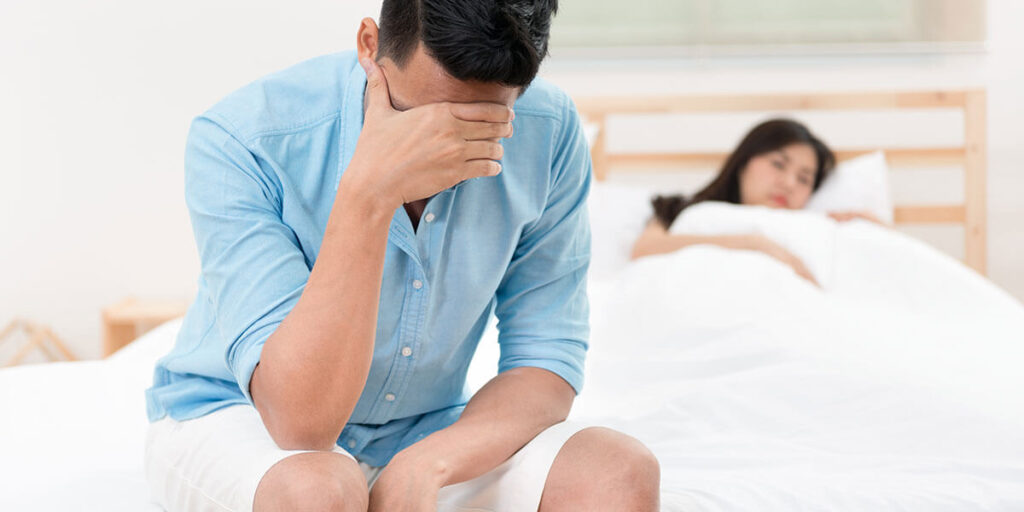 Professor Al Samarrai Provides the best erectile dysfunction treatment in Dubai. The hormonal changes in men after the age of forty, and among them, pathological changes, the most prevalent of which is impotence in men, in addition to sexual problems when they are over the age of forty and the most prevalent are diabetes, cardiovascular diseases, high blood pressure, obesity, as well as mood changes (Depressed Mood).

Men between the ages of thirty and seventy years develop symptoms of male hormone deficiency syndrome due to obesity first and metabolic diseases second, negatively affecting their lifestyle. If these men are diagnosed:

1- A decrease in the male hormone in the blood below (nmol / L8.7), the symptoms of which are:

And Depression and memory loss.

Erectile dysfunction plays a major role in a man’s life where the relationship between the sexes is negative and the life and style of the person affected are affected. Recent statistics have shown that thirty million men are affected by this in the United States of America only, where the incidence of impotence is 12% among men under 59, 22% between 60 and 69 years of age, and 30% over 69 years of age.

The relationship between body weight increase and sexual dysfunction has proven to be direct, where the incidence of impotence in men is 30% when the body mass index is BMI above 28.7 (Body Mass Index), where the normal (BMI) is under 25, with Knowing that the symptoms of impotence in overweight or obesity men are above 79%, Whereas, pathological changes in blood vessels such as Atherosclerosis and others are always present in the case of obesity in general and excessive in particular. These play an important role in ED diseases.

Recent scientific research indicates a positive pharmacological and preventive effect against age factors, which leads to hormonal, organic, or metabolic changes such as obesity, sexual dysfunction, high blood pressure, high triglycerides, cholesterol in the blood, sleep disorders, mental mood changes (Depressed Mood) and irritability. ). All of these can now be treated early with treatments recognized by the (WHO) and it is advised to give them to these patients to get rid of these diseases and their symptoms.

We can say in general that the development and improvement of the lifestyle with healthy and moderate nutrition begin with eating low-fat meat, low-carb foods and following the Mediterranean diet, which contains a lot of vegetables, fruits and grains, exercise and avoiding smoking and alcohol and maintaining the sugar level in diabetics at the middle level. After eating diabetes regularly, the blood sugar should be between g / dl (130-150) and strict adherence to that, reducing weight and keeping fit by conducting exercises for 16 hours a week, such as walking, running, and Swedish exercises.

It lies in changing the lifestyle and behavior of these patients and at the same time their drug treatment, which inevitably leads to an improvement in the side effects of these diseases, especially impotence, as there is an urgent and urgent need to treat these pathological causes. As recently confirmed by some clinical studies that taking the contraindications of (PDF5) and at the same time taking a treatment that improves nitric oxide production in the blood vessels and protects them from damage leads to an improvement in their ability to expand and thus improve physical functions in general and sexual in particular. For more visit our Professor Al Samarrai Facebook Page or contact us to get any Information.